You are here: Home > Things To See & Do > Altrincham Football Club 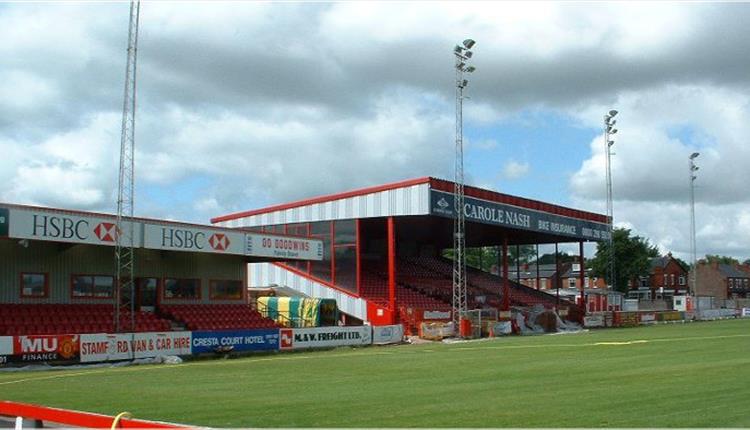 Altrincham Football Club is a short 10 minute walk from Altrincham town centre and the ground has the capacity to hold 6,000 spectators.

Altrincham play in the Vanarama National League. Its history can be traced back to around 1891 when it was known as the Rigby Memorial Club and formed from a local Sunday School. The club were founder members of the Manchester League in 1893 and are the only founder members still in existence.

The club played on a variety of fields before acquiring a home at Pollit's Field in 1903 the year they changed their name to Altrincham FC. The club moved to it's current home in 1910, and their first game was against Macclesfield which they won 3-1. When in the same league these 2 clubs regard matches as a local derby.

The club home strip is red and white stripes, they are nicknamed The Robins and have a mascot called Rocky Robin. Altrinchams highlights in the F.A. Cup incude a match against top league opposition Tottenham Hotspur who they held to a draw at White Hart Lane in 1978. But even more famously, they defeated Birmingham City 2-1 at St Andrews in 1986.

The club is family orientated and now has football teams from youth level through to a senior non league team.

Please visit the club website for information and fixtures: