You are here: Home > Things To See & Do > Gateway To The North > Explore The North from Manchester > Lancaster Castle

Lancaster Castle is owned by Her Majesty the Queen, who is the Duke of Lancaster. As well as being a fortification, the Castle was also Europe’s longest-serving operational prison until its closure in March 2011. In addition, its courtrooms have witnessed many famous and infamous trials over the centuries, including those of the Lancashire Witches who were convicted and sentenced to death in 1612.

The castle was also the site of the trials of the Lancashire Martyrs between 1584 and 1646, and George Fox, the founder of the Quaker movement, was imprisoned there for two years.

The Grand Jury Room houses some superb Gillow furniture, and in the Shire Hall there is a magnificent display of heraldic shields.

The Crown Court dock still has the branding iron which was used on 'malefactors' until 1811. From 1596, many prisoners convicted at the Castle were sentenced to transportation, initially to the West Indies and American colonies, and later to Australia. Visitors can also experience briefly what it’s like to be locked in one of our 18th century cells. Since May 2013 the guided tour has also included the chapel yard and the main courtyard of the former prison

The former A-Wing has been opened up at Lancaster Castle as part of its guided tours, with a new ‘Prison Life’ exhibition in the ground-floor cells.

The new exhibition allows visitors to view the cells at their own pace, as part of the existing tour.

There is also a varied programme of events throughout the year, including theatre, music, dark history tours, children`s activity tours, Halloween tours, murder mysteries, and much more. The cafe in the courtyard is open daily from 10am until 5pm. See the website for more information.

Open daily for guided tours from 10am until 3pm (1st Nov to 1st Apr - Court sittings permitting). Guided tours leave from the cafe in the courtyard which is accessed through the main gates. Closed Christmas/New Year. Visitors to Lancaster Castle are advised to check opening times by telephoning 01524 64998.

The guided tours cost £8 adults, £6.50 concessions, £20 family ticket (the Explorer ticket - valid for 12 months is excellent value and includes entry to 11 other museums in Lancashire.)

Please note that dogs are not permitted in Lancaster Castle, with the exception of assistance dogs.

Discover more of the story with the Lancaster Castle app. The app uses cutting-edge technology to give historical moments a fresh perspective and make history’s fascinating characters come to life. 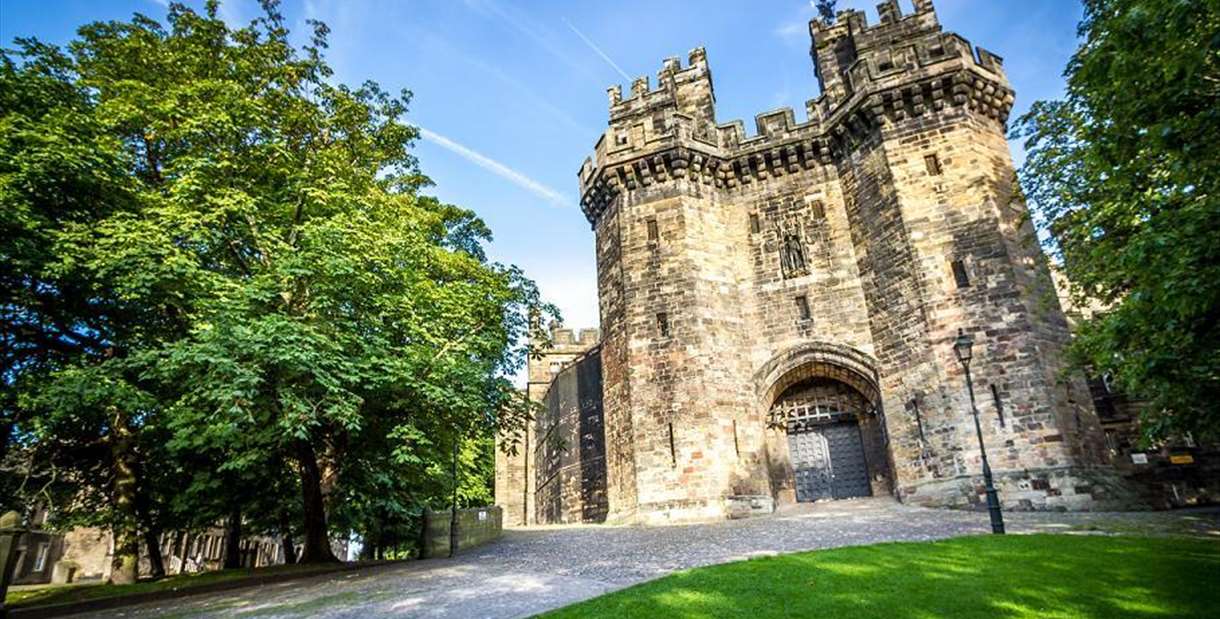 The nearest train station is Lancaster which is only a 5 minute walk from Lancaster Visitor Information Centre, just outside the city centre. The station is on the West Coast Mainline with regular mainline Virgin services to London & South and Glasgow & North. Local services include a regular service to Morecambe. For more information call National Rail Enquiries on 08457 484950 or visit nationalrail.co.uk. The nearest bus station is Lancaster which is less than a 5 minute walk from the central pedestrianised shopping areas of St Nicholas' Arcade and Marketgate. Local, regional and national services are available. For further information contact traveline on 0871 200 2233 or visit traveline.org.uk.

Café open daily from 10am until 5pm. Closed Christmas/New Year.
Visitors to Lancaster Castle are advised to check opening times by telephoning 01524 64998