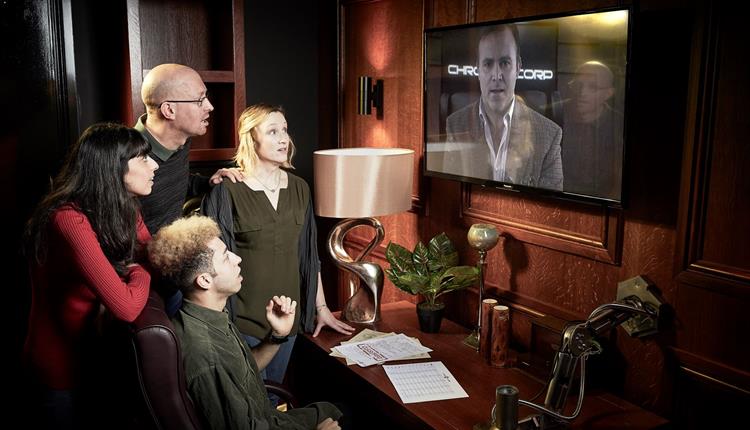 Hidden cemeteries, grisly ghost walks and haunted halls – Manchester and Salford certainly stand out for their connections to the unnerving and unusual. Now it seems the cityscape has connections to other dimensions too – or at least in the most enjoyable sense – as the UK’s first official Doctor Who live escape game is now open.

Located in the Escape Hunt venue within Manchester city centre’s historic Corn Exchange, ‘Worlds Collide’ is the name of the new escape room game. It presents guests with Time Lord-inspired adventure scenarios, interactive fun and a unique immersive experience.  It allows participants to step into the world of this much-loved show and try it out for themselves thanks to a specially-designed location and unique visuals.

According to Gary Williams, BID Events Producer at CityCo and producer of Manchester BID’s Halloween in the City festival, who reflected on the significance of the game coming to Manchester:

“It’s great to have this immersive experience in the city...perfect for families and fans alike. I’m a painfully huge Doctor Who fan and can’t wait to fight the Cybermen in this one-of-a-kind Escape Room. The Cybermen have always been one of my favourites...they tap into our fear of technology, they’re the terrifying end point of our continued search for advancement. Also they have funny voices and look cool! This Escape Room captures the mix of humour and horror of the show that has been thrilling kids - and big kids -for decades.”

‘Worlds Collide’ has been developed by BBC Studios and Escape Hunt, launching in Bristol, Leeds, Oxford and Reading as well as Manchester – highlighting the popularity of the TV show-meets-transformative-game format. But why such a surge of interest? According to Dr Chloé Germaine Buckley (Senior Lecturer in English Literature and Film at Manchester Metropolitan University and member of The Manchester Centre for Gothic Studies), who researches the Gothic and gaming culture…

“Games are becoming increasingly visible as a form of popular culture, from the gamification of health and self-improvement through digital apps to the incorporation of role-play and theatrical elements at tourist venues.

“While roleplaying games are still to some extent the province of so-called geek culture, aspects of roleplaying are present in popular attractions like Escape Rooms. Escape Rooms are in fact an interesting hybrid of gaming modes, asking for a suspension of disbelief and playfulness required by roleplaying games whilst engaging visitors with puzzles, brainteasers and problem-solving. They attest to the fact that the play element in culture persists in many analogue forms despite the prevalence of digital media.”

'Worlds Collide’ offers the opportunity for teams of up to six people to become the Doctor’s new friends and be transported to the future offices of ChronosCorp HQ. Here participants will be confronted with the deadly Cybermen and the evil clutches of billionaire-meets-bad-guy Alastair Montague.

Then the game begins – and within the space of an hour, each team involved will have to work together to save the world from a tear in the fabric of space and time which threatens letting the cybermen through. Fail to do so, and the whole human race faces the danger of being ‘upgraded’.

Tickets for Doctor Who: The Live Escape Game, Worlds Collide are on sale now and bookable online via Escapehunt.com/DoctorWho/