You are here: Home > Things To See & Do > Warburton Souling Play 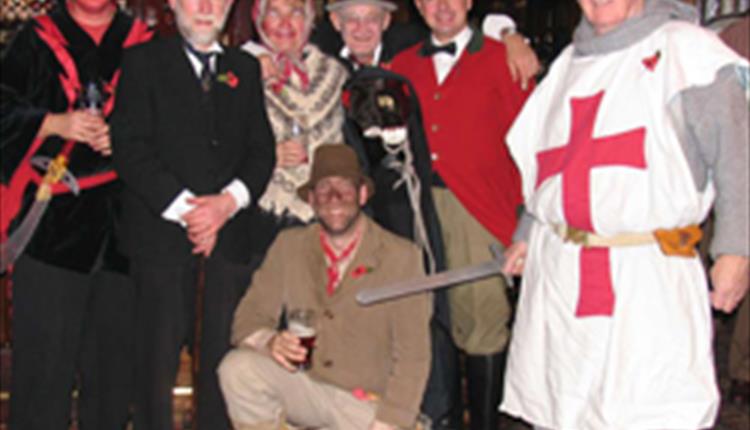 The Souling play is an ancient mystery play play of death and revival involving a fight between the hero usually St George and the villian who can vary but is often a foreigner, the introduction of a horses’ head into the “souling” seems to be peculiar to Cheshire. The Warburton play is also reported to be one of a group where apples were requested following the performance so in this case is is a Soul-Appling play. The origin of souling plays is much disputed however local archives site the origin of the custom as the collecting of money to assist the souls of the poor out of purgatory and the play is performed at the beginning of November. The plays were not written down but passed down from generation to generation by word of mouth, all have a traditional core but they would have also followed topical happenings of the day. Three reference to the souling have been found in local archives . One references the horse. “The head was an uncanny prop, usually a horses’ skull from the knackers yard, tarred and with brilliant red-raddled teeth. It was considered unlucky to touch the skull and after each souling play it was secretly buried until the following year.” According to the diaries of Katherine Egerton Warburton “On November 1st the wilder young men used to go about with lanterns at night, one wearing a horses skull which they called “Old Nobs” and went to the farmers homes for drink and money.” Margaret Pennington in her book “Our Village Dunham Massey” suggests the Soul caking died out about 1892. The play was revived in 1978 and now plays over several days in a number of local pubs with money being collected for charity. Please help support this local tradition by checking out the performance dates on the above web site and going along to support the players.