You are here: Home > What's On > An evening of folk horror with Lucie McKnight Hardy & Andrew Michael Hurley 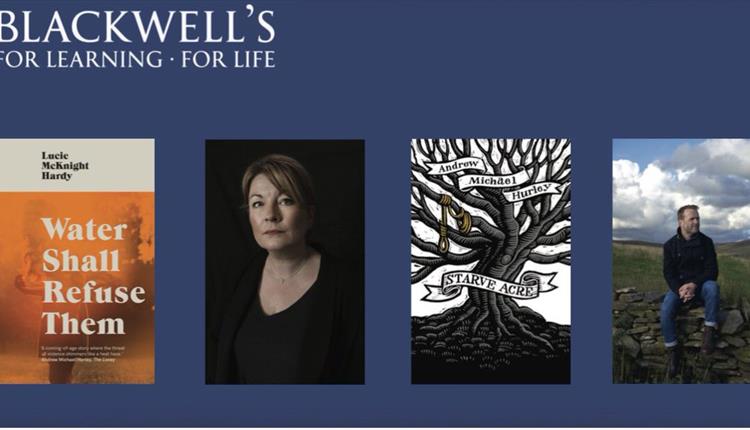 A special evening of folk horror with Lucie McKnight Hardy and Andrew Michael Hurley - at Blackwell's Bookshop Manchester. They'll be talking to author Rosie Garland about their latest books 'Water Shall Refuse Them' and 'Starve Acre'. This takes place on 24 October, 7-8.30pm.

'Water Shall Refuse Them'

The heatwave of 1976. Following the accidental drowning of her sister, sixteen-year-old Nif and her family move to a small village on the Welsh borders to escape their grief. But rural seclusion doesn’t bring any relief. As her family unravels, Nif begins to put together her own form of witchcraft – collecting talismans from the sun-starved land. That is, until she meets Mally, a teen boy who takes a keen interest in her, and has his own secret rites to divulge.

Lucie McKnight Hardy grew up in rural West Wales, the daughter of London immigrants. She grew up speaking Welsh and her education was in Welsh. She studied English at the University of Liverpool, studied creative writing with the OU, and has just completed the MA in Creative Writing at Manchester Metropolitan University.

The worst thing possible has happened. Richard and Juliette Willoughby's son, Ewan, has died suddenly at the age of five. Starve Acre, their house by the moors, was to be full of life, but is now a haunted place.

Juliette, convinced Ewan still lives there in some form, seeks the help of the Beacons, a seemingly benevolent group of occultists. Richard, to try and keep the boy out of his mind, has turned his attention to the field opposite the house, where he patiently digs the barren dirt in search of a legendary oak tree.

Starve Acre is a devastating new novel by the author of the prize-winning bestseller The Loney. It is a novel about the way in which grief splits the world in two and how, in searching for hope, we can so easily unearth horror.

Andrew Michael Hurley has lived in Manchester and London, and is now based in Lancashire. His first novel, The Loney, was originally published by Tartarus Press, a tiny independent publisher based in Yorkshire, as a 300-copy limited-edition, before being republished by John Murray and going on to win the Costa Best First Novel Award and Book of the Year at the British Book Industry Awards in 2016. Starve Acre is his third novel.

Rosie Garland (as featured in a HAUNT Manchester article here, regarding her Writer-in-residence role at The John Rylands Library)  is a novelist, poet, performer and singer with post-punk band The March Violets. She is the author of The Night Brother, Vixen and The Palace of Curiosities which won Book of the Year in the Co-op Respect Awards 2013 and was nominated for both The Desmond Elliott and the Polari First Book Prize.

Tickets are £3.00 and include a complimentary glass of wine plus money off the books on the night.