You are here: Home > What's On > An Evening of Queer Gothic Horror with Leon Craig and Alison Rumfitt 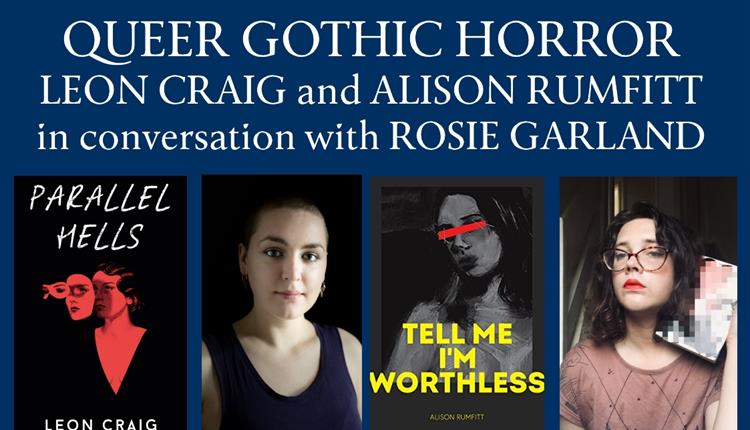 We're delighted to be welcoming two incredibly exciting new authors to the shop for an evening of queer Gothic horror - Leon Craig and Alison Rumfitt will be discussing their brilliant debuts PARALLEL HELLS and TELL ME I'M WORTHLESS with author and poet Rosie Garland.

Parallel Hells is a deliciously strange debut collection which draws on folklore and gothic horror in refreshingly inventive ways to explore queer identity, love, power and the complicated nature of being human.

In the thirteen darkly audacious stories of Parallel Hells we meet a golem, made of clay, learning that its powers far exceed its Creator's expectations; a ruined mansion which grants the secret wishes of a group of revellers and a notorious murderer who discovers her Viking husband is not what he seems.

Asta is an ancient being who feasts on the shame of contemporary Londoners, who now, beyond anything, wishes only to fit in with a group of friends they will long outlive. An Oxford historian, in bitter competition with the rest of her faculty members, discovers an ancient tome whose sinister contents might solve her problems. Livia orchestrates a Satanic mass to distract herself from a recently remembered trauma and two lovers must resolve their differences in order to defy a lethal curse.

Tell Me I'm Worthless is a dark, unflinching haunted house novel that takes readers from the well of the literary gothic, up through Brighton's queer scene, and out into the heart of modern day trans experience in the UK.

Three years ago, Alice spent one night in an abandoned house with her friends Ila and Hannah. Since then, things have not been going well. Alice is living a haunted existence, selling videos of herself cleaning for money, going to parties she hates, drinking herself to sleep. She hasn’t spoken to Ila since they went into the House. She hasn't seen Hannah either.

Memories of that night torment her mind and her flesh, but when Ila asks her to return to the House, past the KEEP OUT sign, over the sick earth where teenagers dare each other to venture, she knows she must go. Together Alice and Ila must face the horrifying occurrences that happened there, must pull themselves apart from the inside out, put their differences aside, and try to rescue Hannah, who the House has chosen to make its own.

Cutting, disruptive, and darkly funny, Tell Me I'm Worthless is a vital work of trans fiction that confronts both supernatural and real-world horrors as it examines the devastating effects of trauma and the way fascism makes us destroy ourselves and each other.

Leon Craig is a writer from North London. She studied English at UCL, Medieval Literature at Oxford and Creative Writing at Birkbeck. Her writing has been published by the White Review, the TLS, Another Gaze and the London Magazine, among others. Leon is a member of the LGBTQ+ Writing Collective the Future is Back.

Alsion Rumfitt is a writer and semi-professional trans woman. Her debut pamphlet of poetry, The T(y)ranny (Zarf Editions), was a critical deconstruction of Margaret Atwood’s work through the lens of a trans woman navigating her own misogynistic dystopia. Tell Me I’m Worthless is her debut novel. Her work has appeared in countless publications such as SPORAZINE, datableed, The Final Girls, Burning House Press, SOFT CARTEL, Glass Poetry and more.

Rosie Garland is a novelist, poet and singer with post-punk band The March Violets. She is the author of three novels - The Palace of Curiosities, Vixen and The Night Brother. Her latest poetry collection, What Girls Do in the Dark, was shortlisted for the 2021 Polari Prize and invites us to leap into deep space and is rooted in the realm of gothic imagination, mythology and the uncanny. It contains magnitudes and magic, feminist fables starstruck with science and astronomy. In 2019 she was selected by Val McDermid as one of the 10 most compelling LGBTQI+ writers working in the UK.