You are here: Home > What's On > Barry Manilow 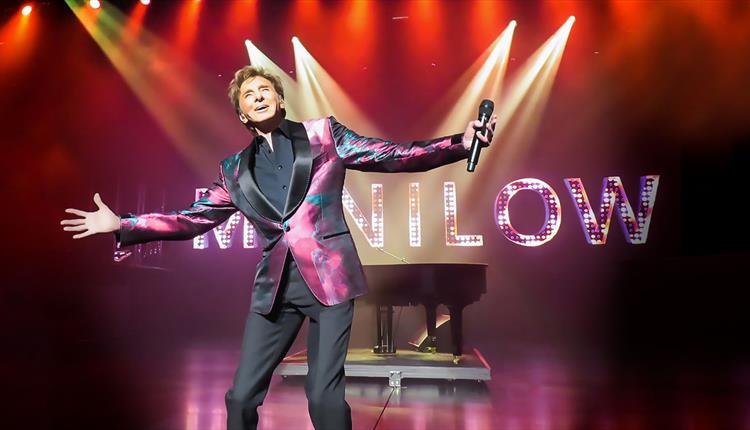 'In a world forever striving for peace, could Barry Manilow be the answer?' -- *The Washington Post* after Barry Manilow’s headlining performance at the Nobel Peace Prize Concert in Oslo, Norway)

With worldwide sales of more than 80 million records, Barry Manilow’s success is a benchmark in popular music. His concerts sell out instantly. He is ranked as the top adult contemporary chart artist of all time, according to *R&R* (Radio & Records) and *Billboard* magazines. *Rolling Stone* crowned him 'a giant among entertainers . . . the showman of our generation' and Frank Sinatra summed up Manilow best when Ol’ Blue Eyes told the British press: 'He’s next.'

Manilow is ranked as the top adult contemporary chart artist of all time, according to *R&R*, with no less than 25 consecutive top 40 hits on the Billboard Hot 100 between 1975 and 1983. The list includes all-time favorites that Manilow still sings today: 'Mandy', 'It’s a Miracle', 'Could it be Magic', 'I Write the Songs', 'Tryin’ to get the Feeling Again', 'This One’s for You', 'Weekend in New England', 'Looks Like We Made It', 'Can’t Smile Without You', 'Even Now', and the Grammy award-winning 'Copacabana (At the Copa)'. All of these songs (and more) were anthologised on the commemorative 1992 four-CD boxed-set, *Barry Manilow: The Complete Collection And Then Some.*

To date, 29 albums by Manilow have been certified plati­num.

In June 2002, Manilow was inducted into the National Academy of Popular Music’s Songwriters Hall of Fame alongside Ashford & Simpson, Michael Jackson, Randy Newman, and Sting.
Manilow is a member of the Board of Governors of the National Academy of Jazz. His autobiography *Sweet Life: Adventures on the Way to Paradise* was published by McGraw-Hill in 1987. In addition to his own foundation, the Manilow Fund for Health and Hope, other involvements include The Prince's Trust, United Way, the Starlight Foundation, and several leading organizations for AIDS prevention and research. Manilow is the national spokesperson for the Foundation Fighting Blindness and a member of the Music Center of Los Angeles.