You are here: Home > What's On > BODIES OF COLOUR Breaking with Patterns in the Wallpaper Collection

BODIES OF COLOUR Breaking with Patterns in the Wallpaper Collection 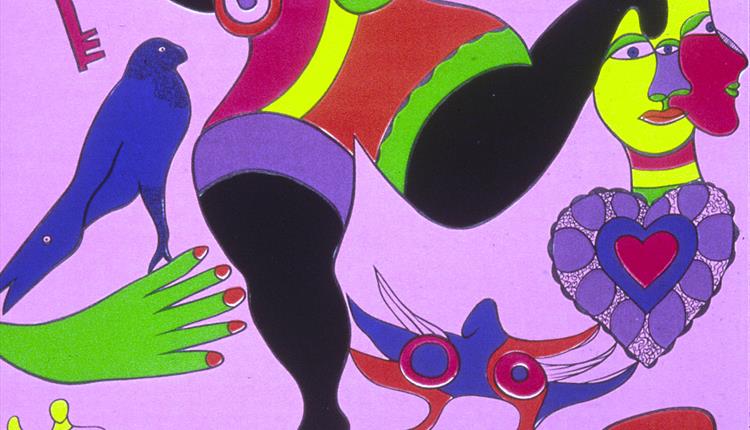 Wallpaper could be understood as innocuous and purely decorative, yet bodies as patterns are repeated across the wallpaper collection at the Whitworth. Bodies of Colour offers an alternative view, acknowledging the part that these wallpapers have played in repeating and affirming cultural stereotypes by exploring the representation of people and showing how we could begin to break ranks, by disarming these patterns to offer something new.

This exhibition uses the Whitworth's extensive and significant collections to focus on how Imperial attitudes to people are reflected in wallpaper. The papers in this exhibition were designed in Western Europe (and a few in America) but inspiration for the patterns comes from across the globe. The popularity of wallpaper grew through the 18th to 20th centuries, at the same time as the rapid expansion of the British Empire; the collection spans these three centuries. The exhibition contains a mix of commercially available wallpapers as well as wallpapers made by artists.

The artists featured in the exhibition have used wallpaper to make social critique. In 1989 Robert Gober used the repeating patterns of wallpaper to startling effect with Hanging Man / Sleeping Man. The alternating vignettes of a black man hanging from a tree by a noose and a white man sleeping make a stark critique of the harrowing history of slavery in America. The white man asleep is a powerful metaphor for enduring blindness to the international legacies of empire. On a more intimate level, Virgil Marti's Bullies (1992) uses lurid fluorescents to colour the yearbook portraits of the artist's school tormentors, the 1970s setting evoked by repeating their faces across flock wallpaper.

The French sculptor Niki de Saint Phalle's Nana (1972) is a celebration of the 'monstrous feminine', fleshy and bright and black or brown skinned in the wallpaper iterations of the character. There is ambivalence towards voluptuous black bodies repeated across the wallpaper; they are both triumphant and terrible. Francesco Simeti has often used wallpaper in his installation work. Arabian Nights (2003) uses media images of war in the Middle East within the familiar decorative patterns of Orientalist wallpapers. The artist highlights how human experience is depersonalised in the representation of  'others'.  The repetitive affirmations of modern media messages make a ready parallel with the immersive pattern of a wallpapered space, both unconsciously and rhythmically influencing attitudes.

Sonia Boyce's Devotional Wallpaper (2008) breaks with the usual patterns of wallpaper design, naming black British woman musicians in celebration of them as talented individuals through their names, not their anonymous image. As wallpaper can be seen as a ready reflector of social mores on the one hand, so the selection of the work of Simeti, Gober and other artists in the exhibition demonstrate that it is also an ideal tool for its critique. Boyce's Devotional Wallpaper not only critiques but also offers an alternative means of representation through wallpaper: this work forms the backdrop for a wallpaper table, offering the opportunity for visitors to gather and contribute to the creation of new wallpaper patterns within the exhibition itself.

The commercial papers in the exhibition highlight that we are often blind to the colour of white bodies. The exhibition will explore how white is represented, from blonde children parading across nursery papers to marble-white Greek gods and goddesses in neo-classical designs. Accordingly, these mass-produced wall coverings perpetuate notions of order, beauty and power. In contrast, 'the Orient' has long been associated with frivolity and playful disorder in design.  The fashion for Chinoiserie (things made to look Chinese) has endured for centuries in the decorative arts and there are numerous patterns containing clumsily drawn generic Chinese figures in the collection.

Action Man, Spice Girls, Sindy, even Mickey Mouse wallpapers, all aimed at children and seemingly innocent, can all be understood as part of the repetition of stereotypes of identity in Bodies of Colour, perpetuating particular messages about people and culture that have been established in our everyday.