You are here: Home > What's On > Bourgeois & Maurice 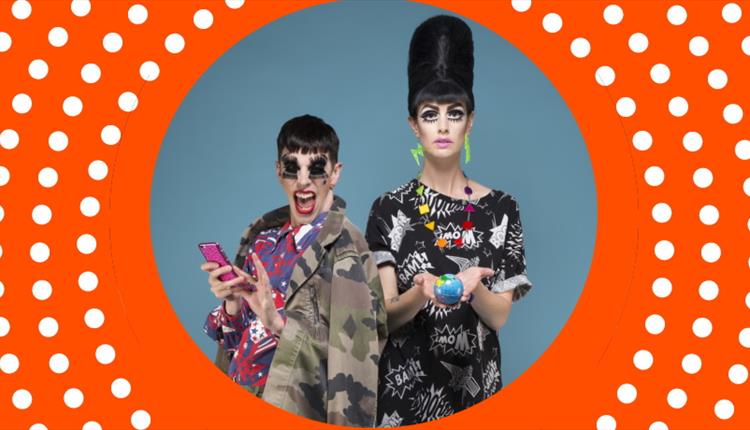 “It’s hard to think of any other act delivering such clever, funny and sharp material” ★★★★ TimeOut

Marking their first Manchester show since their critically-acclaimed musical Insane Animals took HOME audiences by storm, this one-off event is a chance for humansexuals to get up-close(ish) and impersonal with “musical comedy’s answer to the Manson Family” (Evening Standard).

“The sound and music are electrifying… Joyous, utterly bonkers and as camp as anything you will probably see this year.” Big Issue North (on Insane Animals)

Drawing songs from the shadowy abyss of their back catalogue, B&M will take audiences on a hilarious, heartfelt and highly inappropriate journey into the strangest reaches of their minds. Expect old hits, future hits and perhaps the odd confetti drop or five.

“Like something out of Mars Attacks! by way of East London nightlife, Bourgeois & Maurice have worked their up to become modern day Music Hall stars” The Guardian

Blending the line between contemporary cabaret, alternative comedy and prancing around in sequins, Bourgeois & Maurice have established themselves as one of the UK’s most subversive and innovative musical acts. Their work has been seen around the globe from New York to Belgrade, from a converted public toilet to the Royal Opera House. They’ve won awards and released 5 albums but they are still as humble, caring and hungry for attention as ever.

Don’t miss the most cynical double act to come out of the un-United Kingdom since Priti Patel and Alexander Boris de Pfeffel Johnson.