You are here: Home > What's On > Christmas with Aled Jones & Russell Watson 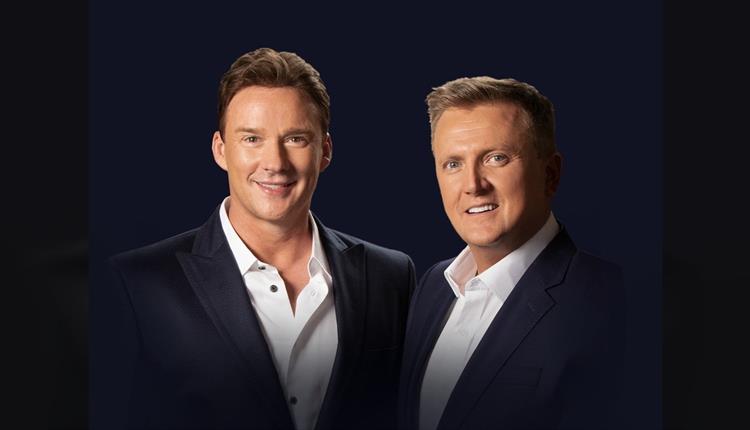 Two of the world’s greatest classical voices, Aled Jones and Russell Watson, reunite for Christmas 2022 with a brand-new album. Performing together again following a three-year hiatus, the powerhouse duo will also embark on a colossal UK tour this November and December.

Two of the nations most treasured artists, Aled and Russell have achieved tremendous successes between them, from prestigious awards to record-breaking chart sales.

Aled Jones is the original classical crossover star, having been at the top of his game for over 40 years. Becoming one of the world’s most successful boy sopranos at the age of 12, he has since released over 40 albums and has more than 40 silver, gold and platinum discs.

Most recently he released Blessings, a multi-faith album featuring songs from a range of different religions and starred on ITV’s hit show The Masked Singer as “Traffic Cone”. He has also forged an extensive career as a TV & Radio presenter, currently hosting his own weekly show on Classic FM and the BBC’s Songs of Praise.

Described by the New York Times as a performer ‘who sings like Pavarotti and entertains the audience like Frank Sinatra’, Russell Watson’s debut album The Voice saw him hold the top spot in the UK charts for an unprecedented 52 weeks in 2001, while also topping the charts in the USA, making him the first British male artiste to attain a simultaneous transatlantic #1.

Throughout his incredible career he has performed for some of the world’s leading figures, including HM The Queen, the late Pope John Paul II, and former US Presidents Bill Clinton, George W Bush and Barack Obama.

In 2020, Russell released his latest album 20, a compilation album marking 20 years since the release of his phenomenally successful debut album, and this year has been performing the role of Billy Flynn in the popular musical Chicago.