You are here: Home > What's On > Covid19: Are we really all in this together?

Covid19: Are we really all in this together? 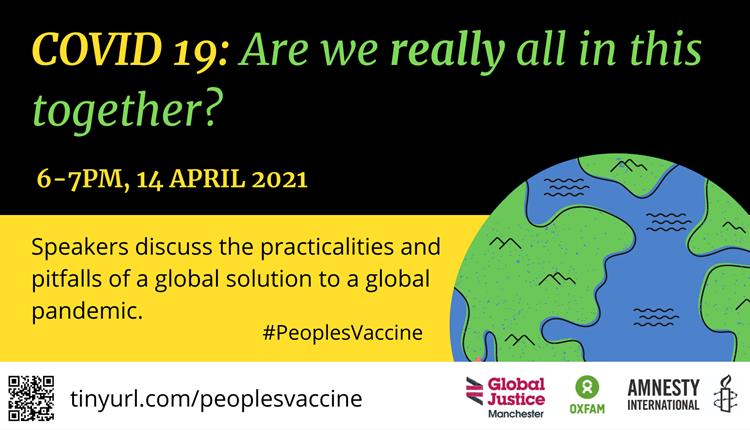 Wednesday 14 April, 6:00-7:00pm – webinar
An expert panel including Dr Rory Horner from the Global Development Institute, and Anna Marriott, Public Services Policy Manager for Oxfam, discuss the practicalities and pitfalls of a fair and equitable distribution of vaccines.

Wednesday 21 April, 6:00-7:00pm – open forum
The profit motive may be a powerful force for innovation but will greed and capitalism get the vaccine to every corner of the world? You have your say.

When Dr Jonas Salk was asked who owns the patent on the polio vaccine he replied, "Well, the people, I would say. There is no patent. Could you patent the sun."

Not taking out a patent cost Dr Salk an estimated $7billion but polio was eradicated from the face of the earth.

But is it really as simple as that?

The UK Government alongside the G7 group of nations are major investors in the development of the new vaccines. They are also major contributors to the international COVAX program.

Meanwhile India, South Africa and many poorer nations have called on the WTO (world trade organisation) to suspend TRIPS (trade-related aspects of intellectual property rights) in the production of Covid-19 vaccines.