You are here: Home > What's On > Enter Shikari 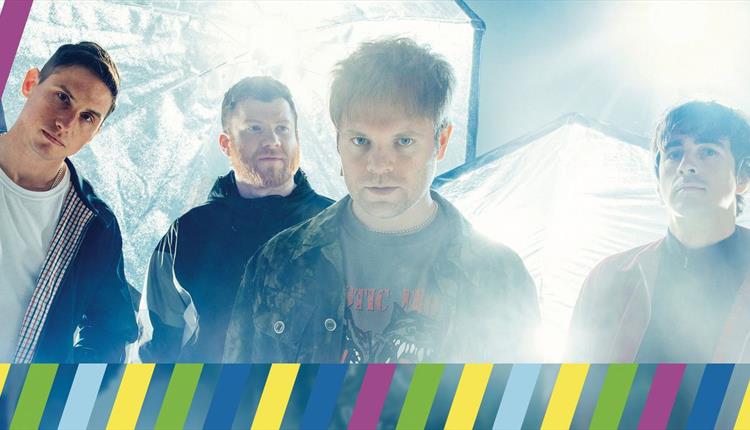 In early 2003 four standard geezers from St. Albans City, a standard area just north of London, formed a band. They formed a band that they hoped would reignite unity into the music scene and ultimately into people's lives. And this was no hidden agenda as they started by fusing many different genres and styles together to form their own sound. They essentially mould together the passion of hardcore and punk with the passion of euphoria and trance amongst many other influences. Enter Shikari translates from Indian as "Enter the Hunter". The Hunter' is a character in a play Rou wrote before the band even existed, a character that gets used as a metaphor for positive aggression. In life you have to experience the lows to appreciate the highs, right? Shikari is that strength inside all of us, that hauls us out of those lows. Shikari is the hope that gives us the energy to continue and hunt for the panacea to our problems. It is live that you witness such a passion in their performance and music that you can't help but feel involved. They've always encouraged as much crowd participation as possible be it in the form of gang vocals, human pyramids, stage dives/invasions, these four lads have always seen the audience more as a collective fifth member than as a group of spectators. With an incredibly intense stage presence that reflects the euphoric aspects of the music, they are definitely a must see live band. In those three years Enter Shikari never really played any big billed shows (not that they had any choice); they always stuck to playing intimate venues with local bands like themselves. Then in the second half of 2006 things began to take off when they played Download Festival. With the Gibson tent overflowing they rose to the challenge and killed it. The media then began to pay attention. After a few more UK tours, they then became the second ever unsigned band to sell out the London Astoria. They have only ever properly released two singles and chose to make only one of them chart eligible. After four years their debut album 'Take to the Skies' is finally out and they look towards the summer for more touring and festivals.