You are here: Home > What's On > Gallery Oldham - From Waterloo to Peterloo

Gallery Oldham - From Waterloo to Peterloo 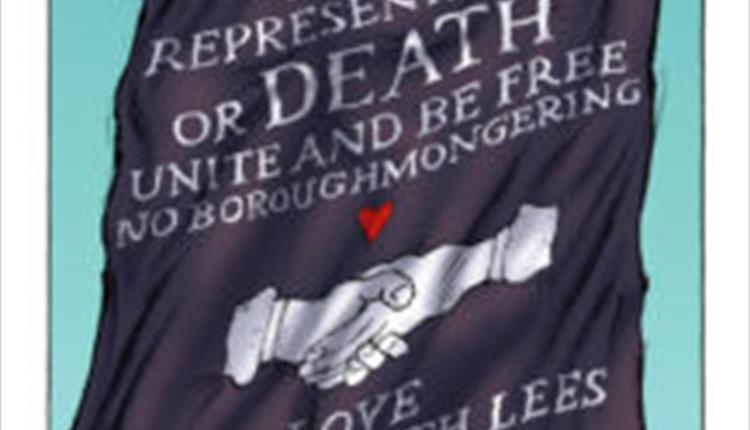 From Waterloo to Peterloo

In 1819 a peaceful political meeting in Manchester ended in violence, confusion and death. This notorious event quickly became known as th Peterloo Massacre and today is recognised as an important step in the development of democracy in Britain.

Thousands of p[eople walked from Oldham and the surrounding areas to attend the meeting. Dozens were injured and several were killed. Oldham became the scene of a notorious inquest into the death of one local man, John lees, who had survived the battle of Waterloo but died as a result of Peterloo four years later.

Our latest exhibition marks 200 years since the notorious Peterloo Massacre. ‘From Waterloo to Peterloo’ explores the many stories linking Oldham and its people with the historic events of Peterloo.

This year marks the bicentenary of the Peterloo Massacre in 1819, when a peaceful political meeting in Manchester was violently broken up by the authorities, resulting in an alarming death toll.  The crowd that congregated was made up of more than 60,000 people and the Oldham contingent was said to be the largest of any group in attendance. Several people from the Oldham area were killed at Peterloo and dozens more were injured.

John Lees, a young man from Oldham, is remembered in the exhibition as he had been a soldier at Waterloo and was killed as a result of Peterloo. The inquest into his death took place in Oldham and is an important source of information about the events of that day.

As well as examining the legacy of Peterloo and why the memory of that day has remained important in the town for many years, the exhibition also looks at what life was like in Oldham in the early 1800s using items from Gallery Oldham’s collections.

These will be displayed alongside several images from a newly produced graphic novel that tells the story of the day: ‘Peterloo – Witnesses to a Massacre.’ You can find out more about this fantastic project here

The Metrolink route through the heart of Oldham drops you just two minutes from our door. Gallery Oldham provides a wide range of exhibitions and activities targeted at different audiences of all ages within Oldham and the surrounding area. From Oldham Central stop head towards Sainsbury’s car park and almost immediately you’ll see the building. Trams operate at least every 12 minutes in both directions. For more details visit www.metrolink.co.uk or follow @MCRMetrolink

Free town centre parking : You can park for free for up to 3 hours on all Council owned town centre car parks (listed below) every Saturday and Sunday. To qualify for this offer you must take a ticket from the pay and display machine for the length of time you are intending to stay.