You are here: Home > What's On > Góbéfest 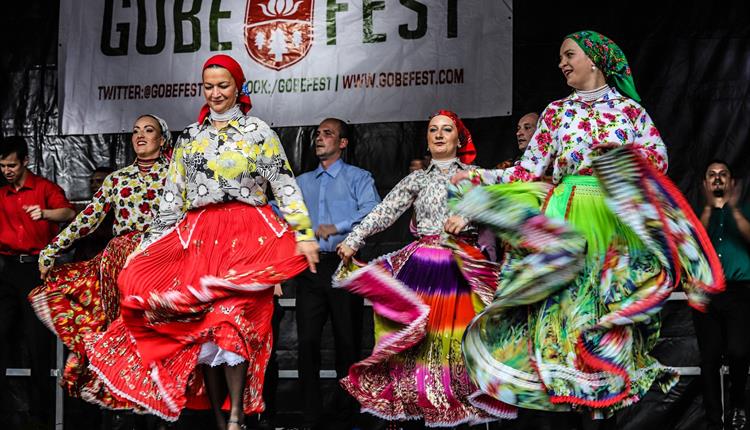 Where else can you eat kűrtőskalács (chimney cake) and mititiei (Romanian skinless sausages) and drink Csiki beer, whilst soaking up the sounds of a cimbalom, marvelling at the kaleidoscope of swirling skirts worn by folk dancers from Szeklerland, Romania, Hungary,Bulgaria and Poland?

Now in its sixth year, Góbéfest is the UK's only free weekend-long festival to celebrate the legendary region of Transylvania and the Carpathian Basin.

Góbéfest shines the spotlight on the intriguing music, dance, culture, food and drink of the Carpathian Basin, bringing a lesser-known expanse of eastern Europe to Manchester every year since 2017.

For three days in June, stages in Cathedral Gardens and Exchange Square will play host to an array of bands, choirs, ensembles,orchestras, dance groups and solo performers, hailing from as far as Transylvania, Croatia, Hungary and Romania.

A food and drink market will serve up popular dishes from around the region, including langos, chicken paprikash and goulash.

For the first time, Sunday will be a dedicated dance day, featuring folk groups in the Transylvanian, Bulgarian, Hungarian, Romanian and Polish traditions.

Some of the Góbéfest performers and stall holders are expats, now settled in Manchester, or other parts of the UK.

Several members of Barozda, a Transylvanian folk group who have been playing together since 1976, now live in Sweden and Hungary, whilst the band Stikli, Góbé Band and children's orchestra Mátyás Király Zither Ensemble will also be flying in from Hungary.