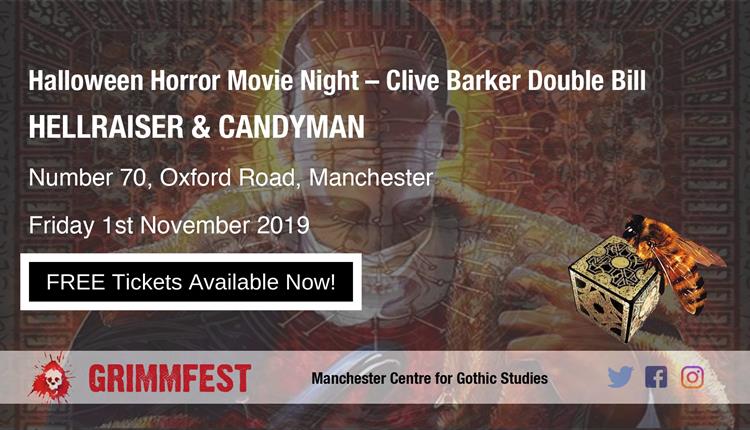 This year, the Gothic Manchester Festival has joined forces with Grimmfest to bring together the ultimate Halloween Movie Double Bill: Clive Barker’s CANDYMAN and HELLRAISER, with an introduction from Dr Xavier Aldana Reyes.

The evening begins with a special introduction to Barker's work from Dr Xavier Aldana Reyes, Reader in English Literature and Film and a founder member of the Manchester Centre for Gothic Studies at Manchester Met. This will be followed by CANDYMAN, Bernard Rose's 1992 screen adaptation of Barker's short story 'The Forbidden'. Fusing urban legend and social critique, and rooted in the dark history of slavery in the American south. This grim fairy tale made a horror movie Icon out of actor Tony Todd and was groundbreaking in its confrontational treatment of racial attitudes in the USA. It's no coincidence that Jordan Peele (GET OUT, US) is producing the remake right now.

And of course, there was only one way to finish: HELLRAISER (1987), Barker's most famous creation, adapted from his own novella THE HELLBOUND HEART. A perverse, blackhearted fantasia, born from the world of S&M, and taking the pursuit of pleasure through pain to a literally hellish conclusion, it introduced the world to the Cenobites; Pinhead, Chatterer, Butterball, and the rest; “Explorers in the further regions of experience. Demons to some. Angels to others.” Now 32 years old it's still as original and disturbing as it was upon initial release.

There will be a licensed bar and a Grimmfest stall selling Halloween themed goodies on the night.