You are here: Home > What's On > Icons of Darts at The Queen Elizabeth Hall

Icons of Darts at The Queen Elizabeth Hall 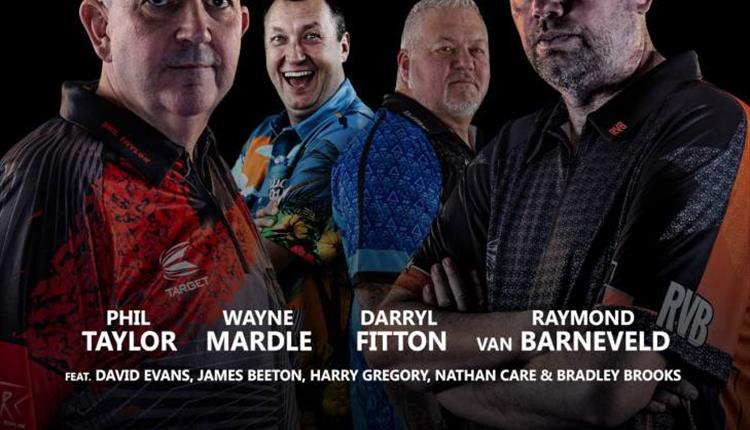 Legendary Darts stars Phil ‘The Power’ Taylor and Raymond van Barneveld are set to reignite the game’s greatest rivalry when they appear in Oldham as part of the Icons of Darts tour.

The pair, who recently retired from playing in professional ranking tournaments, will treat fans to a trip down memory lane by showcasing their skills in a UK Tour in 2020 – with Oldham’s staging taking place at Queen Elizabeth Hall on December 11 2020.

Taylor is undoubtedly the greatest darts player of all time and one of the most successful sportsmen in the world, having won an incredible 16 World Championship titles in a remarkable career. Van Barneveld put darts on the map in Holland, winning five World Championships – with his most famous victory coming in the dramatic 2007 final when he defeated Taylor in a sudden death leg. Both players have revealed their excitement at the upcoming tour.

Taylor said: “It will be fantastic to go up against Raymond again. They used to say that our matches were like the El Classico of darts and I’m really pleased that we can take that to different places around the country. “It will be good nostalgia, but we can both still play to a high standard and that old rivalry will still be there.”

Van Barneveld added: “Phil is the greatest player of all-time and it will be an honour to share the stage with him again. I loved our clashes in the past and I know the fans miss a rivalry like this so now they have the chance to see it up close and personal.”

Tickets for the MODUS Icons of Darts Tour are available via dartshop.tv & ticketmaster.co.uk

Tickets for Oldham’s staging are also available from Queen Elizabeth Hall or online at queenelizabethhall.com

With more than 15,000 sq ft of space, a dance floor of 4,760 sq ft capable of accommodating up to 1,500 people for a stand up concert and three large bars, the QE Hall is Oldham’s premier large event venue. It’s also home to large scale concerts, famous names and sporting events. The nearest stop is Oldham King Street (2-3 minutes walk). For more details visit www.metrolink.co.uk or follow @MCRMetrolink