You are here: Home > What's On > Intervention by Phil Collins and Oleksiy Radynski 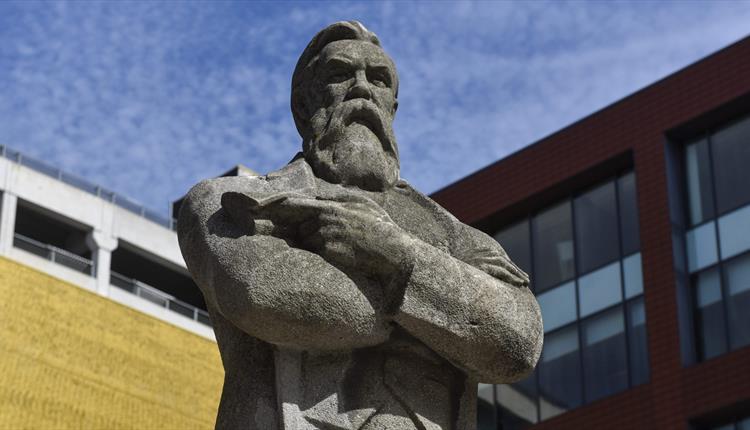 Intervention is a collaborative project by Phil Collins and Oleksiy Radynski, co-commissioned by HOME and Manchester International Festival, re-contextualising the decommissioned statue of Friedrich Engels that stands in the centre of Manchester through the perspectives of writers and activists from Ukraine. Created by an unknown sculptor c.1970 – and located in Mala Pereshchepyna, Eastern Ukraine where it stood until the implementation of decommunisation laws in 2015 – it was transported to the UK as part of Collins’ artwork and film Ceremony in 2017. The project highlights the legacy of this German philosopher in the city where he lived and worked for more than twenty years.

The film follows the retrieval of the statue, its journey to the UK, as well as personal stories of people in Manchester and a large-scale inauguration event organised with local communities, making connections between Engels’ work and present day socio-political conditions in Britain. You can watch Ceremony by clicking here.

In response to Russia’s invasion of its sovereign neighbour, Collins and Radynski transform Engels into a mouthpiece, amplifying the voices of Ukrainian writers and activists. Scrolling across one of two temporarily installed LED panels are texts by Svitlana Matviyenko, Mariia Volotilina, Olexii Kuchanskyi and Radynski, sharing their experiences of the last few harrowing months, and offering perspectives on notions of Russian imperialism.

On the second LED panel a newly commissioned text by social anthropologist Volodymir Artiukh combines analysis on the international economic impact of the war with personal testimonies of those most affected, and excerpts from Engels’ own writings. Together, these voices articulate decoloniality and anti-imperialist positions on ideas of power, oppression and resistance, in what is the biggest geopolitical crisis unfolding in Europe since the end of the Cold War.

Accompanying the three month installation, Collins and Radynski have curated a screening programme. There will be a Q&A with Collins and Radynski, along with screening of Ceremony and additional artist shorts by Daniil Revkovsky & Andriy Rachynsky and Radynski on 6 July. A screening of Yael Bartana’s Two Minutes to Midnight, part of What if Women Ruled the World? commissioned by Manchester International Festival, additional short and introduction with Bartana and John McGrath will take place on 18 July. Further details about these events are to follow. Please keep an eye on our website and social media channels for details.