You are here: Home > What's On > Manchester Folk Festival 2021/ Kathryn Tickell & The Darkening plus support 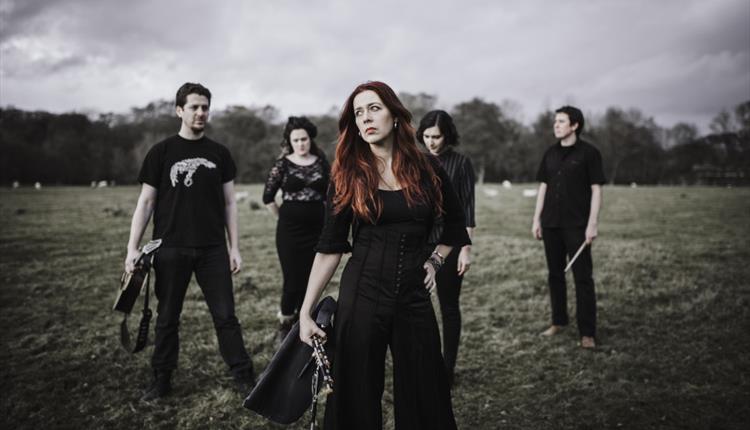 Musicians from Northumberland, Scotland and England invoke the dark, powerful, shamanic sounds of Ancient Northumbria and broadcast them to the modern world.

Their inspiration comes from the wild, dramatic, weather-bitten countryside along Hadrian’s Wall, which seems so quintessentially Northumbrian…and yet, almost 2000 years ago that same landscape was inhabited by people from around the world, worshipping different gods and following different customs.

Kathryn Tickell & The Darkening embrace that global perspective, bringing some of the oldest Northumbrian tunes and songs throbbing to life, intermingling them with new material and binding it all together with contemporary resonance and attitude.
Fresh sounds merge with ancient influences. Expansive sonic textures are created. Dazzling duets from Kathryn’s pipes and Amy’s accordion contrast with the dark and dirty riffs and rhythms of Kieran’s octave mandolin. Intrepid world-traveller Kate adds her fearless explorations and the inventive use of drums and percussion unites the ensemble.

Each year in partnership with English Folk Expo we work with an international territory to highlight new talent and ensure Manchester Folk Festival continues to celebrate a global talent. This year we welcome artists from Hungary.

Three long-lost cousins – the zither, the tambura and the cobza – meet in the music of the Pengetős (Plunking) Trio.

Their musical creativity is rooted in their respect for traditions and allows for the creation of mature, unique sounds. Poetry, virtuosity, innovation and tradition are all characteristics of Pengetős Trio’s music.

The members of the band are all committed to authentic Hungarian folk music. They regularly perform on stage in Hungary and abroad and they also teach music. Alexandra Berta is a Junior Prima Award holding artist, folkmusic education professional at the Hungarian Heritage House; Zalán Csenki is a teacher at Béla Bartók Conservatoire as well as at Liszt Ferenc Academy of Music in Budapest; Bálint Horváth is a student of the Liszt Ferenc Academy of Music in Budapest.