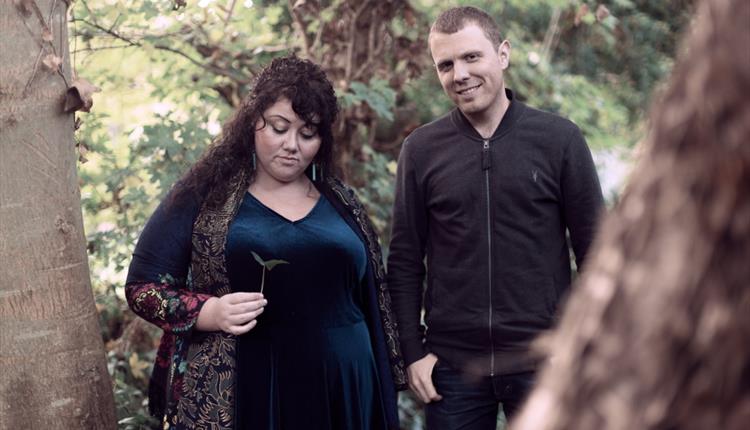 The Breath is guitarist Stuart McCallum and singer/flautist Ríoghnach Connolly. Ríoghnach (pron. Rea-nuh) is Armagh-born and Manchester based. Known for her work with Afro Celt Sound System and Honeyfeet, she met Stuart on the city’s gig circuit several years ago. An unlikely pairing though it was – she a folk singer, loud, brash and mischievous, he an acclaimed jazz guitarist, member of Cinematic Orchestra and a softly spoken Manchester urbanite. Their connection was immediate; they formed The Breath, a duo (with occasional supporting band members) to present their contemporary take on alt-folk.

For them, it’s all about the song. Connolly writes the only way she knows how; a stream of poetic consciousness giving rise to honest, personal, heartfelt songs as likely to touch on childhood summers and first love as cultural dislocation, post-colonial injustices and grief. But it’s her impassioned delivery and utterly engaging, stop-you-in-your-tracks voice – whether delicate and hushed or powerful and gutsy – coupled with Stuart’s understated brilliance and their exquisitely crafted songs, that give The Breath such emotional depth.

The Breath have released three albums on Peter Gabriel’s Real World label. Their breakthrough album, ‘Carry Your Kin’ (2016) delved deeply into the spaces between rock, ambient and Irish folk, where layered vocals, overlaying chords and expansive folk arrangements created a big sound. ‘Let the Cards Fall’ followed in 2018, and, like the first, was recorded with a full band granting a multi-textured kaleidoscope of sound with a cinematic sensibility. Its focus lay squarely on Ríoghnach’s extraordinary storytelling. References to Celtic history and cultural loss are woven into a bewitching collection of songs that span beguiling ballads and punch-the-air anthems. In support of the release, Stuart and Rioghnach performed a series of shows – just the two of them. Stripped bare, they found a new depth and beauty in their heartfelt songs allowing their extraordinary connection to shine through. The duo returned to the studio in 2019 to record ‘Only Stories (Let the Cards Fall Revisited)’ reimagining previous work (alongside two new stunning songs) taking it back to its acoustic roots.