You are here: Home > What's On > Manchester Folk Festival 2021/ The Futureheads plus support 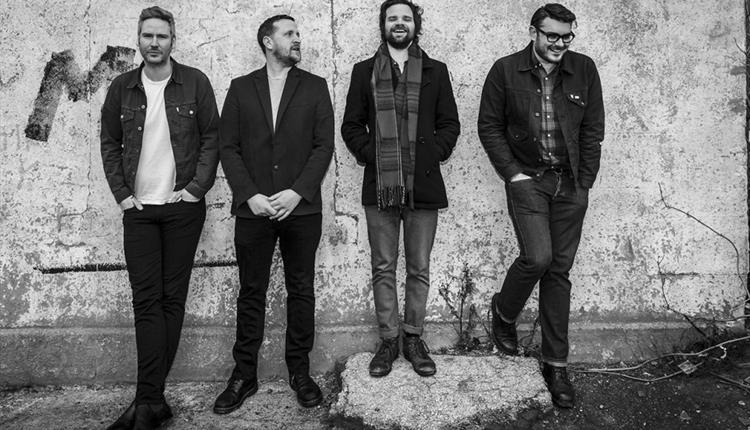 Having first emerged at the start of the ’00s amidst a burgeoning swarm of guitar bands, the Sunderland quartet, with their proud regional accents and spiky, playful sensibilities, stuck out from the off. Over the following decade The Futureheads – comprised of vocalists and guitarists Barry Hyde and Ross Millard, vocalist and bassist David ‘Jaff’ Craig and vocalist and drummer Dave Hyde – amassed five critically-acclaimed albums, headlined countless tours and earned an NME Single of the Year accolade for their iconic cover of Kate Bush’s ‘Hounds of Love‘.

This is a rare opportunity to experience a different side to the band, with the show featuring a mix of acoustic and a cappella song arrangements, intricate four-part vocal harmonies and plenty of audience banter. You can expect a mixture of selections from their back catalogue including songs from their 2019 album Powers, coupled with older favourites, and some covers and traditional songs thrown in for good measure. The band are in the process of writing a new album, drawing on many of these themes, currently expected for release in 2022.

As the band themselves put it:

“We’ve missed being able to play live, we haven’t played a single gig since March 2020, so this is a rare opportunity for us to perform this type of show. The idea behind it is that we can present a different aspect of the band, where we get to talk more about the songs, perform some alternative arrangements with all of us playing a variety of different instruments on the night. These shows give us an opportunity to have some craic with the audience as well. It’s more relaxed and a good laugh.”

“I dug myself out from the well to make Closeness, a record about love”, professes Tuel, “When I sat down to begin what would become Closeness I felt that above all, I wanted to make it clear that, while the clock is moving, we can hold onto one another and maybe there will be tears but there will also be laughter.”

Closeness, the fourth album from Native Harrow, exists at the intersection of two winding roads; time and motion. Recorded over two sessions at the end of 2019 and beginning of 2020, Closeness elaborates on the group’s radiant warmth and timeless nostalgia with the inclusion of new sounds and experiences.