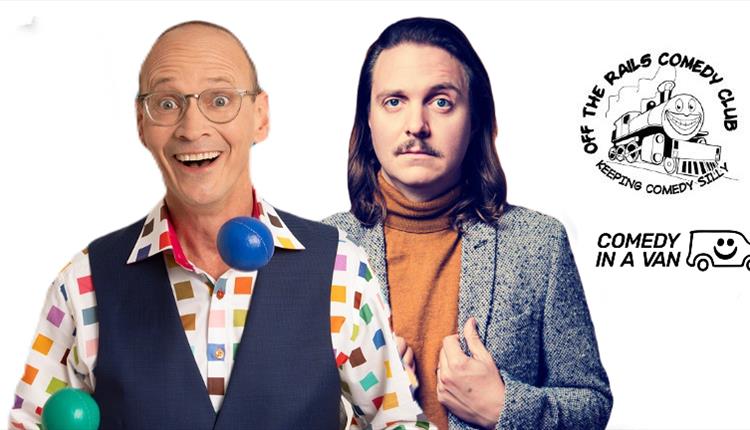 Show starts 8pm Tickets £10 from the venue or online

Acts subject to change. Fully seated. 18+ Proper sweary, swearing. We want everyone to have a great night so please pop your phone on silent and don’t chat whilst the show is in progress. Thanks! Sorry, but we can only reallocate or refund if the show is cancelled.

Described as a “a brilliant comedian” by none other than Peter Kay, Steve Royle has had a career that has spanned everything from the Royal Variety Performance, to Phoenix Nights to coming third on Britain’s Got Talent. A first rate comedy act with unashamed vaudevillian echoes. A highly skilled juggler, Steve holds the official world records for balancing a Christmas tree on his chin and an ironing board on his foot. Much as we love Steve, we do sometimes worry about him.

First time in Saddleworth for the brilliant Joey Page. Joey was something of a cult comic, a hit at comedy festivals around the globe and popped up on Never Mind The Buzzcocks in it’s BBC 2 days. Now, there’s little better for a performer’s ego and reputation than being a cult but it can be tricky to pay those bills. Joey spent lock down working on something more accessible and has struck the perfect pitch between ‘old’ Joey’s niche appeal and the instant, big laughs modern audiences expect. A stunningly original funnyman at the height of his game.

The show comes compete with Ashton’s Liam Pickford (“Funny bones, and a scatter gun mind that doesn’t quite work like anybody else’s.” Chortle) and one act to be confirmed.

Off The Rails Comedy Club is programmed, promoted and produced by Comedy In A Van

The Royal george is located less than a mile from Greenfield Train Station and 1.4 miles from Mossley Train Station. Both are on the Huddersfield line running between Manchester Victoria and Huddersfield every hour. A full breakdown of train times is available from the National Rail website here. Buses