You are here: Home > What's On > The Blockheads 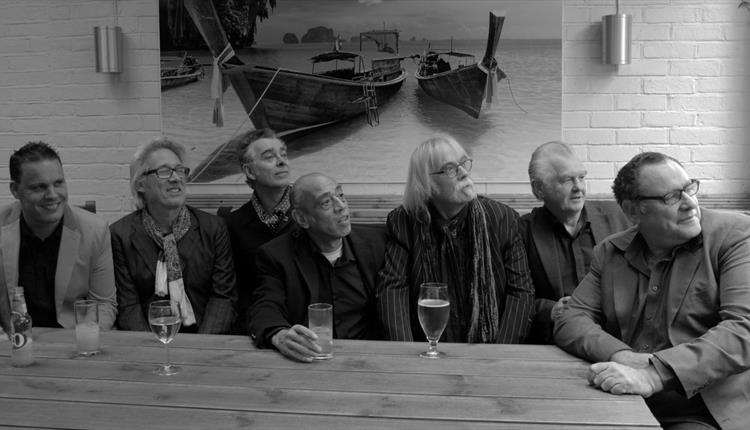 Formed in 1977 to promote Ian Durys’ album ‘New Boots and Panties’ on the first Stiff Records tour of the U.K. Chaz Jankel, Norman Watt-Roy, Charlie Charles, John Turnbull and Mick Gallagher became known as ‘The Blockheads’ (a reference to a song on Ian’s album). As ‘Ian Dury & The Blockheads’ they went back out on tour, this time without Chaz Jankel, and in 1978 released ‘What a Waste’ a single that reached number five in the U.K. charts. They were then joined by saxophonist Davey Payne and toured the U.S.A supporting Lou Reed across North America ending with their own dates in California (with backline roadie Pete Rush)

In late 1978 Chaz returned to the fold and composed ‘Hit me with your Rhythm Stick’ with Ian. The band recorded it in The Workhouse Studios, Old Kent Road, London and in 1979 had a number one hit record with it in the U.K. Ian Dury & The Blockheads went on to record the ‘Do it Yourself’ album and toured Europe and the U.K. recording ‘Reasons to be Cheerful, Part 3’ in Rome. Released as a single in late 1979 it reached number three in the U.K. charts.

In 1980 Chaz, once again, left the band to pursue solo projects in California and Wilko Johnson joined Ian, Norman, Johnny, Charlie, Mickey and Davey to record and release a third album for Stiff Records called ‘Laughter’ and released ‘I Want to be Straight’ and ‘Supermans Big Sister’ as singles. They toured throughout 1981 in the U.K and Europe, sometimes augmented by Don Cherry on trumpet, ending the year with a tour of Australia.

In 1982 Ian Dury & The Blockheads disbanded and were not to play together again until 1987 when they went out to Japan in June to play three shows in four days, disbanding again until 1990 when the death of Charlie Charles in September of that year re-united them to play two Benefit gigs at The Forum, Camden Town in aid of Charlies’ family. Chaz returned from America and Steven Monti picked up the drumsticks for the hottest ticket in town. The band, now augmented by Merlin Rhys-Jones on guitar and Will Parnell on percussion, recorded a live album ‘Warts & Audience’ at the Brixton Academy in December 1990.

Chaz returned to California and the band toured Spain in January 1991. Once again the band stopped working until August 1994 when, with the return to England of Chaz, the band were invited to play the Madstock Festival in Finsbury Park in August which led to a series of hit and run gigs in Europe, Ireland, the U.K.and Japan throughout the rest of 1994 and 1995. In March 1996 Ian was diagnosed with cancer and, after recovering from an operation, was determined to write another album.