You are here: Home > What's On > Venessa Scott: Together We Are

Venessa Scott: Together We Are 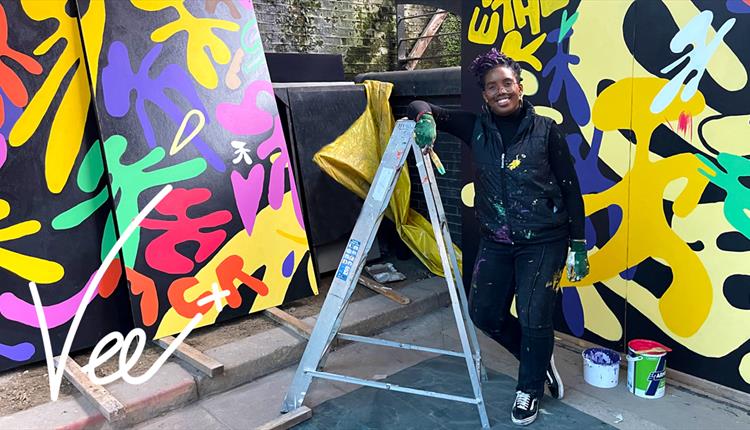 Venessa Scott presents a brand-new mural reflecting on the strength of Manchester and its people. Over the past 18 months, the city has been shaken by a wide range of challenges, but through these times Manchester has stayed vibrant, resilient, and united as a city.

The mural depicts abstract human forms, connected by their alliance to one another. Venessa’s work takes interest in exploring shared experiences, to advocate for the importance of empathy, unity and support in our community.

Venessa states ‘I wanted this piece to be a portrait of the energy of a city that is widely identifiable by the characteristics of its people, and for the mural to serve as an encouragement, that no matter how dark things can become, the unity of Manchester’s people is its strength; Manchester is yours and Manchester is ours.’

Venessa is interested in how colour can be used as a tool to strengthen how the audience interacts with the artwork. For this piece, Venessa developed a colour palette, that not only aimed to bring a sense of joy and positivity, but the specific combination of colours allows this work to come alive when viewed with 3D glasses. When you view this work in 3D glasses, you will experience the abstract shapes bounce and float across the wall, adding a further dimension to the work.

Venessa Scott is a prolific public artist and specialist in Creative Education. Recognised widely for her contribution to the arts and cultural sector in the North. She delivers creative projects, workshops, and interventions to a range of audiences and has been commissioned by leading cultural, corporate and community organisations across the north west and Yorkshire.

Venessa also designed and painted one of the UKs tallest murals in Gorse Hill, Greater Manchester. In 2019 Venessa was appointed as an official ambassador for The Pankhurst Centre and has since been nominated and recognised as a ‘Great Manchurian; A person who has had a significant cultural and creative impact on the City of Manchester and its surrounding areas’.

Head to Whitworth Street West (next to Jack Rosenthal Street) to see the mural in person.