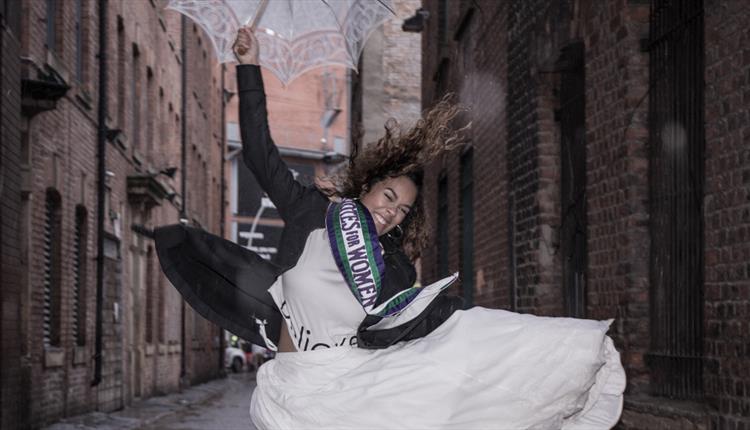 Manchester’s radical feminist past is the creative essence behind Wonder Women 2018, as the most exciting edition of the festival yet takes over the city during March for exhibitions, tours, debates, performances and one-off screenings.  Led by the People’s History Museum (PHM), the festival explores Manchester’s legacy as the birthplace of the suffragette movement from a contemporary perspective.

In this centenary year, and as part of Wonder Women, International Women’s Day (8 March) will take on an even greater significance, which will be expressed with lots of events taking place throughout the day. Contact Young Theatre will present the first performance of She Bangs The Drums (8 March) at the Museum of Science and Industry, which has both humour and politics at its core as it gives life to the stories, voices and testaments of those campaigning for the vote.  There will be screenings, with the Pankhurst Trust showing the award-winning and moving film Suffragette at The Whitworth, whilst the Centre for Chinese Contemporary Art will be showing Hooligan Sparrow; a documentary about China’s most prominent women’s rights activist, exposing the levels of fear and oppression inside one of the world’s most commanding nations.

International Women’s Day at the People’s History Museum begins with an invitation to join a special lunchtime tour with historian Helen Antrobus that picks out the stories of females who have helped to shape the society we live in today - reformists, Chartists, suffragists, suffragettes, MPs, radicals and revolutionaries.  It will be remembering and discussing the plight of female refugees in The Ongoing Nakba, an afternoon event focusing on the plight of Palestinian refugee women who were forced to flee their homes during the 1948 Palestinian Exodus.  And the discussion continues into the evening when BBC Radio Manchester will broadcast live from the museum (7pm to 8pm) as a panel debates topics around the impact of women’s suffrage 100 years on.

Wonder Women 2018 will create a platform for women’s voices, with the chance to meet, talk to and share being a clear aim of the festival.  Stirring women to find their voices through a historical look back, Quarry Bank Mill’s exhibition Lost Voices (opening 3 March) will recapture the voices of the women during the ten year period from 1918, when legislation was passed giving some women the vote (over the age of 30 and who met certain property qualifications), to 1928 when all women were given equal voting rights.

The Women in Media Conference (3 and 4 March) recognises the influential force of the media and invites discussion around its role and some of the problems that women working within the industry currently encounter. And in the high profile world of football, whilst strides have been made, the women’s game remains overshadowed by its male counterpart and faces ongoing gender-related challenges. The National Football Museum’s conference (8 and 9 March) addresses some of these questions and also marks 150 years of women’s football.

The stories of the women involved in the struggle for the vote are powerful; there are also many dimensions to them and many sacrifices made, as the performance of Sylvia at the Working Class Movement Library (3 March) by Lynx Theatre will demonstrate.  As a trained artist, Sylvia Pankhurst’s design work, including her depiction of the ‘angel of freedom’, helped to elevate the impact of the suffragette campaign and ensured its lasting legacy.  But she also dedicated much of her time to painting and writing about the awful living and working conditions of female workers to make a case about the conditions and the lack of pay equality with men.  As well as presenting a captivating insight into one of Manchester’s most fascinating heroes, the event will include rarely seen archive images.

Responding to the historic struggles of women, the collective strength of women coming together and also taking a look at life for women today, artists Ruth Barker and Hannah Leighton-Boyce’s exhibition at Castlefield Gallery (9 March to 29 April) will take many forms including ancient mythology and everyday life.  Wonder Women 2018 will also celebrate the pioneers of the city, women who have helped to shape the world, with Manchester Museum championing their stories in a talk and object handling session by Michelle Scott and Judith Fabian titled From Petticoats to Microscopes (12 March).

Bringing every aspect of exploration together in a day of performance, creative workshops and talks The Drama of the Suffrage Movement at the People’s History Museum (10 March) will celebrate the theatrics of the high impact public displays that those campaigning for the vote put on.  Noted speakers on women’s suffrage will take part including Elizabeth Crawford, Professor Katharine Cockin and Dr Naomi Paxton with the museum’s collection adding further inspiration.

Throughout Wonder Women and 2018, visitors can see the People’s History Museum’s display of political and trade union banners in its main galleries, each of which focused upon the issue of representation.  The display is changed annually, with 2018’s collection giving a vivid account of the slogans and philosophies that were integral to the suffrage movement, as well as other campaigns. 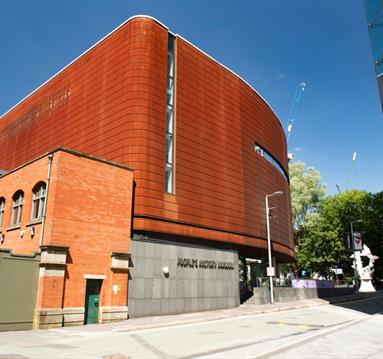 People's History Museum, MANCHESTERPeople’s History Museum is the national museum of democracy, telling the story of its development in Britain: past, present, and future.