You are here: Home > Where to Stay > Velvet Hotel 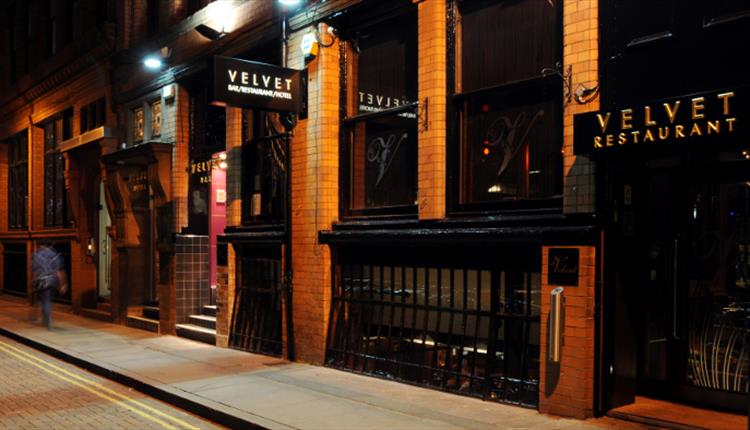 Imagine a place where the boho chic of New York's East Village meets with the glitzy cosmopolitan self esteem of London's West End - and somewhere in the maelstrom, you will find Manchester's Canal Street - situated alongside the Rochdale Canal, as the name would suggest. Velvet Manchester has been instrumental in, and indeed integral to Canal Street's Cafe Society for more than a decade, maintaining its place as the Village's premiere venue to eat and drink, chill or party as the mood takes you, amidst the ever changing and evolving social-scape of this unique and exciting destination in Manchester city centre.

March 2009 sees the dawning of a new era for both Velvet and the Manchester hotel circuit, as Velvet sprinkles its unique chutzpah and creates the plush 4 star Velvet Hotel. Hotel stays will be taken to an opulent new level for business and leisure guests alike. 19 fully air conditioned decadent boudoirs, individually designed with the utmost of tender loving care, will comprise all of the things you would expect of an exceptionally high standard of hotel bedroom – Velvet King Rooms with King or over-sized king beds, airy Balcony ~Suites, and lavish Penthouse Suites with digital TV, complimentary WiFi access, in-room safe, bespoke tea & coffee making facitiliesAll rooms contain fully stocked mini bars, plus some things that you might not expect - like iPod docking stations, in-room cocktail and canape packages and bespoke Burt's Bees toiletries.


Careful detailing and distinctive design elements will ooze from every crevice, creating a contemporary feel with a twist and coupled with attentive yet understated service with a smile. A choice of continental or full English breakfast, all locally sourced and with a few Velvet curveballs thrown in for good measure, will be served in the Velvet Restaurant on basement level.