You are here: Home > Shopping > The Royal Exchange Manchester 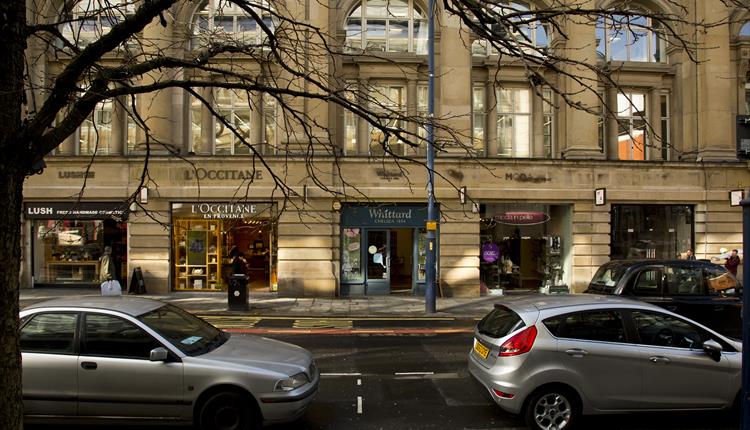 Once the hub of the world’s cotton trade, The Royal Exchange Manchester is now an eclectic collection of luxury retailers, premium high street brands and best in class independent boutique shops playing a key role in Manchester’s thriving shopping and lifestyle culture.

Situated in the heart of the city looking out on to St Ann’s Square, The Royal Exchange Manchester is in close proximity to Manchester Arndale as well as luxury stores such as Selfridges, Harvey Nichols and House of Fraser, with many of Manchester’s hotels, restaurants and cafes nearby.

The city centre location makes it easily accessible, with Piccadilly Station and Victoria Station only a 10 minute walk away.

Whether it’s designer fashion, bespoke jewellery, beauty or gifts, The Royal Exchange Manchester has it all on one level.

In addition to shopping you’ll find Razor’s Edge hair salon in the Arcade, along with Alterations Boutique if you’re looking for a first-class alterations service. And If you want to take a break from the hustle and bustle of city centre shopping there’s a choice of Annie’s tearoom (owned by Coronation Street’s Jenny McAlpine), Michael’s café or TGI Fridays for fun with friends and family.

This premium retail destination is a must for the itinerary for shopping trips and city breaks to Manchester; it is one of Manchester’s most iconic landmarks and is a big part of the city’s history. It was constructed in its current form between 1914 – 1921 and was officially opened by King George V and Queen Mary upon completion.

The building is also home to the much-loved Royal Exchange Theatre.

If travelling by Metrolink, the nearest stops are Market Street, St Peter’s Square and Exchange Square – each of these are less than ten minutes away on foot. There is a frequent and reliable tram service throughout the day and evening from Altrincham, Bury, East Didsbury, Eccles and MediaCityUK.

There are plenty of places to park within a 10-minute walk of the Royal Exchange, if you prefer to drive. These include Deansgate NCP multi-storey car park (where Blackfriars Street meets Parsonage), High Street multi-storey car park, (above the Arndale Centre) and Manchester Arena car park, next to Victoria station.

Take a taxi from either St Mary’s Gate taxi rank or the Albert Square taxi rank, opposite the Town Hall.