You are here: Home > Things To See & Do > Canal Street history 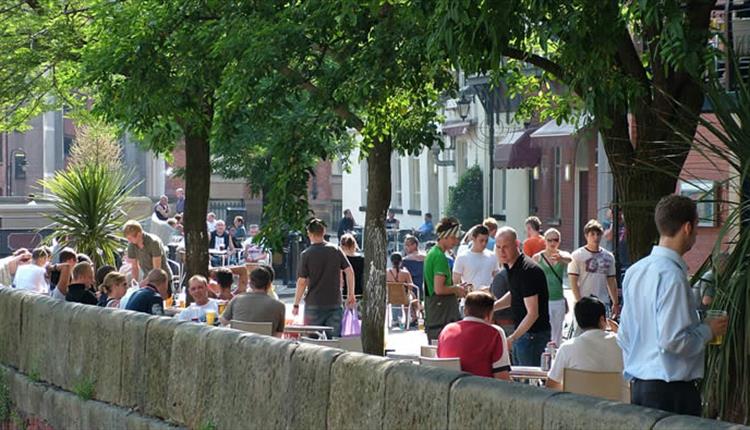 Manchester is known across the world as the birthplace of the industrial revolution, home of world famous sporting clubs and setting for the world's longest running TV soap opera.

But there is another element that has developed over the past 200 years and continues to do so today - Manchester's gay heritage. The Canal Street we know and love today looked very different 100 years ago. Closet pubs and dark streets have made way for out and proud bars, restaurants and cafés. But how did we get here?

Manchester's current 'Gay Village' developed alongside the Rochdale Canal, which still runs through the city centre. The canal was opened in 1804 and was the 'M1' of its time. This was the first canal to run from the Pennines through Lancashire, bringing raw materials to the city and then finished products to the docks at Liverpool on to the farthest corners of the British Empire. When the cloth trade declined in the early and mid 20th century, the area went into decline and the old warehouses became silent, dank and derelict. The area along the canal was perfect for gay men to meet as it was dark and unvisited, but was near to good transport links such as Oxford Rd and Piccadilly Station.

The years before the Village in the 1980's were ones of repression, with relations with the local police at an all-time low. Even with the legalisation of homosexuality in 1967, only those over 21 and in private were legally allowed to express their emotions physically and many a young gay man exploring his sexuality along Canal Street like Nathan from 'Queer as Folk' was still prey for the authorities. Club raids were the norm, a particular example being that of the Mineshaft in the late 1980's when several innocent men were hauled off to the police cells. These days, things have changed enormously, with a Police Liaison Officer for the gay community and the local police being cheered as they proudly march in the Pride parade through the city streets every year.