You are here: Home > Things To See & Do > Canal Street 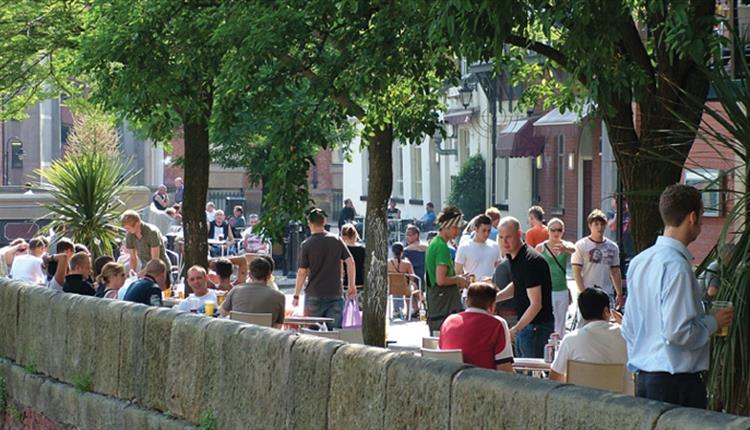 A beacon of celebration in the city, the Gay Village is a must for any visitor to Manchester.

Located just south of Chinatown, along and around Canal Street, the Village is both party central and a living piece of social history - proof that Manchester is one of the world's leading gay-friendly cities.

Gay culture has flourished into a village-like community with a combination of bars, clubs, restaurants and green spaces set alongside a long stretch of the Rochdale Canal, making it the perfect setting for alfresco drinking and dining.

The vibrant Village welcomes all members of the LGBT community with venues catering for all manners of persuasion providing entertainment seven nights a week.

Wednesday nights, affectionately know as 'Butterflies', are particularly popular with the trans community, with  Napoleon's and New York New York all having a faithful repertoire of regulars.

For food,  Richmond Tea Rooms on Richmond Street is a traditional English style tea room serving Afternoon Teas of mouth-watering cakes, teas and specialities set in over the top décor themed around Alice in Wonderland's Mad Hatter's tea party. It has quickly become a very popular addition to the Village.

The Molly House, also on Richmond Street, is an intimate, rustically styled pub and its vintage décor is a delight in which to enjoy some of their home cooked tapas and cakes and carefully selected ales and wines. The music has as much of a range as the drinks, and is kept low, so you chat without shouting.

Next door is Number 1 Canal Street, one of the most highly regarded bars in the village, seen by many as the community heart of Canal Street. Its informal drinking and dining atmosphere and appreciation of the arts means that you might get to see a new play or exclusive book reading or art exhibition if you pop by.

Bar Pop keeps the soundtrack of camp classics and nostalgic favourites coming, run by Mr. Poptastic John Hamilton and co. Poptastic also hosts one of the area's most popular club nights - on Tuesdays and Saturdays - at  Club Alter Ego. KiKi is both a lounge bar and a nightclub occupying the space which was formally Queer bar.

G-A-Y is a pop music haven with music video walls and a roof terrace, offering regular drinks promotions to a lively crowd, whilst the gothic interior of  Via is the perfect setting for a few pints of lager while enjoying the bar's nightly entertainment of drag queens and DJs.

For a relaxing glass of wine, Tribeca's Manhattan styled interior is a firm favourite, as is the legendary New York New York on Bloom Street - popular for its camp comedy cabaret nights. Cocktails reign supreme at the decadently decorated Oscars piano and showtunes bar, a must for all musical theatre fans.

Vanilla, the city's legendary lesbian bar, makes sure that the girls get good representation with a selection of fun bar nights and one-off bank holiday events. Coyotes Bar is another favourite haunt for the ladies.

On top of all of this, gay-run shops, a sauna, off licence and the best late-night chippy in Manchester city centre ensure that there's more to the Village than bars and clubbing.

Outside of Manchester's gay village you can find some fantastic alternative nights for the LGBT community. Kraak in the Northern Quarter regularly hosts the likes of Off The Hook, Drunk at Vogue and Pop Curious?, whilst Club Alter Ego (home to Poptastic) also hosts the infamous Bollox on selected Fridays. HomoElectric also happens once a month in various venues across the city, so check their website or Facebook page for details.

The Village also plays host to a number of regular annual events and special community activities. Manchester Pride is one of the biggest Pride events in the UK, attracting a huge number of visitors to the city each year. Manchester also proudly hosts Sparkle, the national transgender celebration weekend in July, whilst the Great British Bear Bash sees the gay village taken over by the larger, bearded, hairier chap over the May Bank Holiday weekend.