You are here: Home > Things To See & Do > Chetham's School of Music 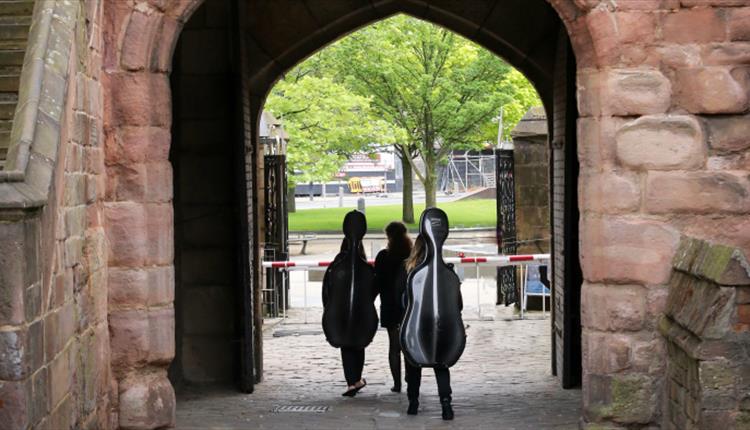 Chetham's ¡s is a unique cultural institution that combines music, education and heritage. Home to the internationally renowned School of Music and Chetham's Library, the oldest public library in the English speaking world, Chetham's is a prestigious, surprising and awe-inspiring place to visit.

Every weekday during termtime, students perform Lunchtime Concerts which are free for the public to attend, beginning at 1.30pm and lasting approximately 45 minutes.  The Library is also open to the public throughout the week, with timed entry at 10am, 11am, 12pm, 1.30pm, 2.30pm and 3.30pm.

The building that houses Chetham's is even older than the School and Library. It was built in 1421 to accommodate the priests of Manchester's Collegiate Church, and remains one of the most complete medieval domestic complexes to survive in England. The history and heritage of these buildings tell a story by turns of ecclesiastical, aristocratic and scholarly renown which are richly ingrained with English history. After the English Civil War and the Parliamentarian overthrow of the Lord of the Manor, a "Hospital School and Library" was founded in 1653 by Humphrey Chetham.

For centuries, Chetham's Hospital School continued as it had been established. It was in the 1950s and 60s that music was put down firm in the foundations and in 1969, a bold decision was taken to change the boys' Grammar School to a fully educational boarding, specialist Music School.

The thriving creative community at Chetham’s involves up to 300 students aged 8-18, whose common passion is music.  Entry to the School is based solely on musical ability and potential, never on background or ability to pay, thanks to generous bursaries through the Government’s Music and Dance Scheme.  This common bond of musical passion makes for a truly inspirational place which transforms the lives of all who are part of it.

This magic is the result of many different qualities that permeate the fabric of Chetham’s: the warm and welcoming atmosphere, the daily creative buzz, admirable academic standards, Chetham’s history and heritage, our superb teaching and performance spaces, the city of Manchester as a cosmopolitan location, our many different backgrounds and personalities – and of course, the music.

Chetham’s is the largest specialist Music School in the UK and is the only one based in the north of England.  The School is also a national and international resource for music education – welcoming teachers, professional players, composers and conductors, community groups, school children and other young musicians, both experienced and novices, to come together and make music.  Our network of partnerships with professional orchestras and organisations extends across the music industry, and our alumni populate orchestras and ensembles across the world.

Based in the heart of Manchester, Chetham’s is housed in a state-of-the-art New School Building, with an acoustically designed concert hall opening onsite in 2017 as a new home for student performances and professional concerts.  The opening of The Stoller Hall will further develop the links between Chetham’s students and the professional musical community, and will build on the School’s already strong position within Manchester’s cultural sector.

As one of the world’s most prestigious schools of music, students are drawn to Chetham’s from across the globe, creating a diverse, international school community.  High standards in both music and academic study lead to success in competitions and in future careers.  Since 2008, around a third of the semi-finalists at each BBC Young Musician of the Year competition have been Chetham’s students.  Aged 12, Peter Moore was the youngest person ever to win the competition in 2008. Other recent successes have come from the First Scottish International Youth Piano Competition and the BBC Proms/Inspire Composers’ Competition, and appearances alongside John Rutter, the Gabrieli Consort and in front of royalty.

Chetham's Library is the oldest public library in the English speaking world.  It was used regularly by Karl Marx and Friedrich Engels as a place of study and meeting, and contains a vast collection of printed materials and ephemera dating back to its establishment in 1653.  Highlights include an original chained library, the archives of the amusement gardens at Belle Vue, and rich collections of sixteenth and seventeenth century printed works, periodicals, journals and broadsides.  The Library is open to visitors from Monday to Friday with timed entries from 10am until 3.30pm.

In 2017, The Stoller Hall will open at Chetham’s as Manchester’s newest space for performance.  Built within the New School Building, this 480 concert hall, designed by Stephenson Studio with acoustics by Arup, will host a wide range of performances both by the School’s students and alumni and by professional touring artists, in a programme embracing classical and contemporary music, comedy and spoken word.  This adds to a busy annual programme of performances by the School’s superb young musicians.  Lunchtime Concerts ay 1.30pm every weekday are free and open to the public; other highlights include the acclaimed Big Band, Sinfonia and Symphony Orchestra combining professional standards of performance with a blast of youthful energy.

Chetham’s is situated in the heart of Manchester in Cathedral Gardens, a green space for the city. Opposite Urbis, the MEN Arena and in front of Victoria Train Station, Chetham’s is within easy reach of all main train, bus and road links.

By bus: Buses stop minutes walk from Chetham’s on Corporation Street and at Shudehill Transport Interchange. The central bus station at Piccadilly Gardens, where many main services stop is 10 minutes walk away or catch the Bury tram and alight at Victoria Station. For bus enquiries call: 0161 228 7811. www.gmpte.com

Manchester is at the heart of the Northwest’s motorway network with easy access from north, south, east and west onto the M60, the city’s orbital motorway.

From the North and East, exit the M60 from junction 19 and follow signs for Manchester City Centre along the A576 and A665. Once in the City Centre, turn right onto Corporation Street, Right onto Victoria Station Approach, and Chetham’s is situated on the left, set back on the pedestrianised area.

From the South and West, exit M60 from junction 12, follow M602 and then the A57 into Manchester City Centre. Take the left hand lane, going up the rise and at the roundabout take a left joining the A56. Follow A56 for one mile, and then turn right for Victoria Station. Follow Hunts Bank round onto Victoria Station Approach and Chetham’s is situated on the right, set back on the pedestrianised area.