You are here: Home > Things To See & Do > Manchester Jewish Museum 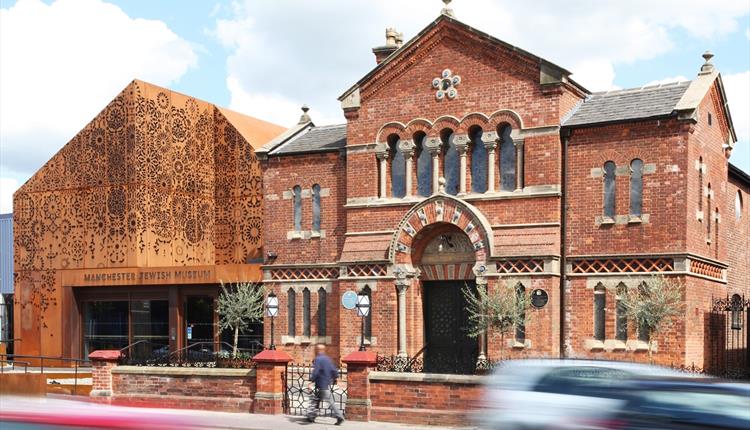 Manchester Jewish Museum is common ground; a hospitable place that makes connections by showing and sharing universal experiences through the stories of one culture. They connect Jewish stories to the world and to our society to explore both our differences and similarities, and to celebrate that which makes people unique and that which connects us all.

Situated in Cheetham Hill, one of the most diverse areas in Manchester and just 15 minutes walk from Victoria Station, the museum opened in 1984 and is housed in a Grade II* listed (former) Spanish and Portuguese synagogue. The museum has recently completed a multi-million pound redevelopment and the new museum boasts a stunning extension which includes a new gallery, vegetarian kosher-style café, shop and learning kitchen as well as a complete restoration of the breath-taking synagogue.

The synagogue was originally designed by renowned Victorian architect Edward Salomons, who was inspired by the Portuguese and Spanish origins of the local Jewish community of the 1870s. The building is a beautiful example of Victorian architecture and you can see some of the stunning features including the stained-glass windows, cast iron fitments and restoration of the original decorative paint scheme. The extension has been designed by architects Citizens Design Bureau to sensitively integrate with the historic building, paying tribute to Edward Salomons’ geometric designs.

The only Jewish museum in the UK outside London, Manchester Jewish Museum’s collection has been described as one of the most outstanding Jewish collections in Europe, with over 30,000 objects, documents, photographs and oral histories charting the growth of Manchester’s diverse Jewish communities, a city with the second largest Jewish population in the UK.